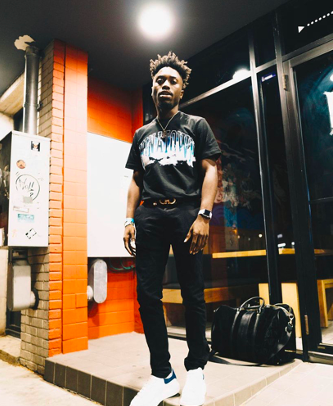 For every aspiring DJ out there, DJ Pop is a lesson in how hard work can lead ultimately to success. Born Papa Yaw Acheampong to Ghanaian parents, DJ Pop knew he wanted to get into music from an early age. Turning that dream into a reality, however, proved more difficult than first met the eye. After finding initial success DJing at West Virginia University, DJ Pop fought hard to gain exposure in his native Maryland, eventually working with some of the biggest names in the DMV. Now a seasoned producer and musician in his own right, DJ Pop has produced songs with DMV artists such as Money Marr & Black Fortune and manages 32 Entertainment, a music group full of up-and-coming DMV artists. As DJ Pop shared in a recent interview:

“I started DJing at West Virginia University. After working as a bouncer for a local club, I began DJing random weeknights and slowly made my way up the house roster. It took a ton of hard work, but by the time I graduated I was DJing concerts for big names like NLE Choppa, Lil Skies, Q Da Fool, Fat Trel, Tay Money, Hoodrich Pablo Quan, Lil Duke, and many more. By 2017 I was full on DJing and throwing concerts myself, putting them together and paying these artists from the revenue. I did all of this before turning 21 and built my one-off DJ gigs into a full-time career and successful production & management business.”

After catching his big break performing with Lil Skies at West Virginia, DJ Pop moved back to his native Maryland to gain exposure in the burgeoning DMV music scene. The adjustment initially proved difficult for Papa Yaw, coming into a much larger music scene, but DJ Pop soon gained a toehold with local clubs and the rest is now history. After several months of networking and playing to smaller crowds, DJ Pop began producing music for DMV artists Money Marr & Black Fortune. Pop’s incredible production skills and exclusive beats soon propelled him to the top of the local charts, as the young DJ gained momentum among DMV fans and clubs. This exposure proved the key to DJ Pop’s success.

Speaking to his mindset through all these trials and tribulations, DJ Pop recounts that “the most important mindset is to always have a plan and be positive. Celebrate those little wins within the big picture. You have to make sure you’re always consistent and you can wake up every day wanting to work for it. That’s the key; the more passion and love you have for your business the easier it is because the work you put in doesn’t feel like work, but rather it brings you satisfaction in whatever your business may be. Your mindset should be that you are a business now; a walking LLC. You have to act like a boss because you are the boss.”

Moving forward, DJ Pop hopes to build on his earlier successes with several fresh ventures, including a videography business and his own bespoke luxury clothing line. DJ Pop’s music business, meanwhile, is still thriving. Pop will drop a single alongside artist Black Fortune early this year, while beats are in the works with Chopstar, another popular DMV producer. Within DJ Pop’s group, 32 Entertainment, several artists are releasing songs with Pop’s support. Finally, Pop will be dropping several new videos on YouTube under Supernatural Visuals, including a new series dubbed “Day in the Life.” With vlogs in Miami, Los Angeles, and New York on his radar, as well as interviews with other famous artists, DJ Pop is already proving himself a force to be reckoned with in the DMV music scene and beyond.